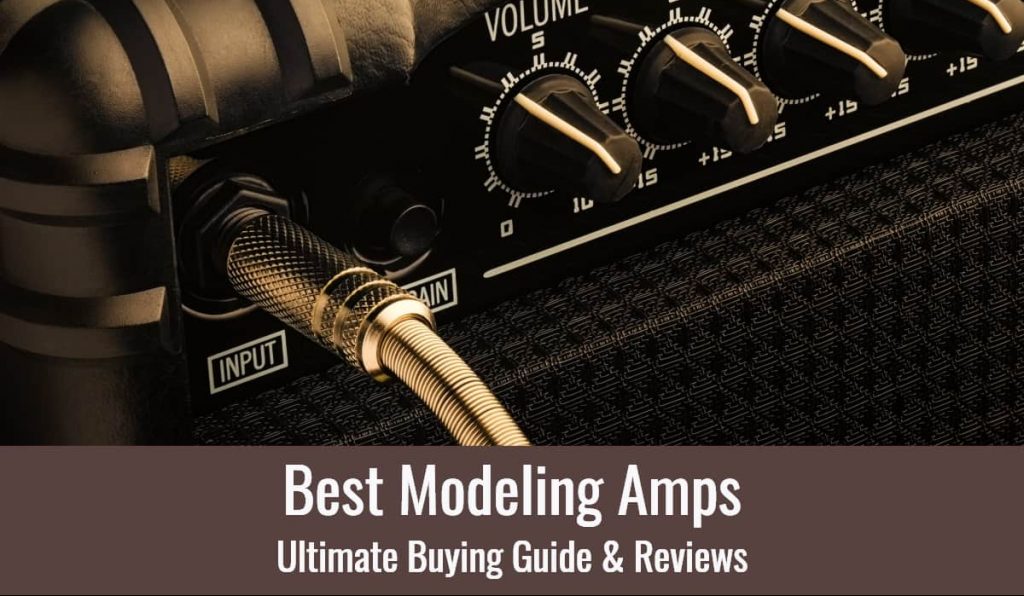 Of the great tools that have been developed for the guitar player in recent years, the modeling amp is perhaps the coolest. No longer do you have to invest in multiple amps and cabinets to get the sound you want, you can just dial it in with the twist of a knob – or a few knobs.

Of course, with all the choices out there, what is the best modeling amp on the market?

What You Need To Know About Modeling Amps

So what exactly is a modeling amp? In the simplest terms, modeling amps are guitar amplifiers that employ technology that allows the amplifier to emulate the sound of a number of other amplifiers within a single package, and often offer a variety of built-in effects as well.

The Fender Mustang I V2 amplifier, for example, is able to emulate the sound of a number of early Fender amplifiers, as well as British amps (e.g. Vox and Marshall) from the 60s and 80s, and also some of the heavy metal amps of today.

Additionally, it contains settings for reverb, delay, chorus and tremolo, eliminating the need for huge pedalboard with all those effects. Other modeling amps go even further and try to dial-in the tone of a particular artist or band.

Line 6 offers presets on their Spider series such as “Killer Queen” or “Little Wing” that are meant to emulate the sounds of Queen’s Brian May or Jimi Hendrix, respectively.

Some high-end modeling amps from companies like Kemper and Fractal Audio Systems, which are used by big name touring acts like Testament and Avenged Sevenfold, incorporate cabinet modeling which allows the user to dial up a specific cabinet and speaker combination.

If you want a 4×12 Marshall cabinet loaded with Celestion greenbacks (my personal favorite) or Fender Twin, no problem, just dial it up.

2. What Are Some Different Types Of Modeling Amps?

The majority of modeling amps, particularly the less expensive ones, are solid-state, digital devices that essentially use an onboard computer to control the emulation and effects.

Other manufacturers use a combination of analog and digital technology in an attempt to achieve a more realistic emulation of tube and/or analog sounds with varying degrees of success.

Some of the higher end amps from manufacturers like Peavey and Vox use tubes as well digital modeling technology to achieve the best combination of tube amp sound with the flexibility of a modeling amp.

For the purposes of this review, we won’t be looking at any of the “stand-alone” modeling devices like the Line 6 POD or other multi-effects modeling processors. Those devices have their place, but are not true modeling amps.

3. Why Should You Use A Modeling Amp?

The most obvious reason to purchase a modeling amp, whether you are a gigging musician or beginner just starting out, is that is saves you from having to buy multiple amps to achieve the sound you are looking for.

This especially nice for the working guitarist is a cover band where you may be switching from 70s classic rock to contemporary metal or even country, all in the space of a single set.

Rather than having to unplug from one amp into another, and fool with the settings to get it all set up the way you want, it’s all right there at the push of a button.

There’s also the issue of the manual labor involved in transporting and setting up multiple amplifiers. Most bands travel around with a small trailer that holds all of their equipment and space can get tight. The less equipment you have to lug around, the better.

Not to mention then having to unload and set up those amps where you are often your own roadie.

For the beginner, a modeling amp allows you to play with your sound and learn about different amp and effects combinations without breaking the bank.

After a while, you’ll learn to identify different amps and effects in the music you hear on the radio or at a live concert and maybe incorporate some of those into your own playing.

4. What You Should Look For

Modeling amps come in a wide variety of sizes, power ratings and prices. It’s important to remember what you are going to USE IT FOR and WHERE you are likely to be practicing.

For the beginner just fooling around in his or her basement or bedroom, a little practice amp of 20 watts or even smaller will probably suffice. Most of them are very reasonably priced in the $100 – $300 range.

You can get a pretty good volume out of most of them, and yet they won’t shake the neighbors’ windows. As you move up in power, of course, the price increases.

A good amp for gigging parties and small clubs should range in the 40 – 100 watt range. You’ll also want such an amp if you’re practicing in a large studio or warehouse so you have sufficient projection. Such amps will usually run upwards of $300, but there are a few out there that are a bargain, giving excellent performance for a very reasonable price.

The style of music you intend to play also factors into your decision.

For someone who plays a wide variety of styles, the focus should be on versatility, so amp that offers several different amp/cabinet combinations is ideal.

For those who stick strictly to classic rock, an amp that offers more of what’s usually called the “classic Marshall” sound would better suit those styles. These would be amps that might also have an option for “British” or “VOX” tone, depending on the manufacturer.

For country, an amp that emulates the KT88 or 6L6 tube amp sound (“classic American” or “Fender”), which is typically brighter and has more reverb, is best.

Metal players are usually fine with a more digital sound, and tube amp emulation is not as important to them. They should look for an amp that has more onboard effects than it does amp models to choose from.

These amps use digital technology to constantly monitor the amp’s preamp circuits, which are themselves analog and 12AX7 tube driven, meaning that you get the authentic warmth of a regular tube amp and realistic emulation at the same time.

Also, because the 12AX7 is the same tube used in the preamp stage of the classic VOX AC30, this amp reproduces that tone exceptionally well.

The Vypyr VIP 1 is a great amp for many styles of music, but it particularly excels at metal and hard rock, with a LOUD volume for a small 20 watt amp and like the VOX Valvetronix VT20X, this amp comes in 20, 40 and 100 watt versions all with the identical technology

The nice thing about the VIP1 is that it can be used for guitar, acoustic guitar and bass. This is really handy for those us who play all three instruments, and a cost effective solution to the need to buy separate amps for each instrument.

For great sound in a small, lightweight package, the VXII might be the amp for you.

The VET (Virtual Element Technology) modeling circuits provide the best of analog and digital circuitry to provide the truest modeling of classic amplifiers. The amp also comes bundled with VOX’s JamVOX III and the new VOX Tone Room software for deep editing of your favorite amp models and effects.

Behringer used to be known as the company that produced cheap practice amps with an average sound, but not anymore.

With the Contour Control dialed in, this amp is dead-ringer for a Randall or Blackstar, with really pronounced and punchy mids, perfect for the metal or hard rock enthusiast.

While there is no option to add or edit tones, for the amp purist, this one is hard to beat.

This solid state amplifier is rock solid, it is on the pricier end of the scale.

Coming in 3 different sizes and nine different styles, the hard part will be in choosing which one fits in best with your individual needs.

You can purchase the model with just the head, or the combo model which includes either one or two speakers.

All models have the same features and technology. While Yamaha amps have always done the solid state thing well, I particularly like the EL84 and EL34 tube emulation for solos and lead guitar work. It delivers clear and even response without sacrificing tube-like warmth.

Easily the most complex and feature filled amp package in this list. This amp comes in 30, 75 and 150 watt styles. In addition to being a guitar amp, it can also function as a Bluetooth speaker system for wirelessly streaming audio from your Bluetooth enabled audio devices which is great if you ever want to jam with your favorite bands.

With so many options to play with, it’s hard to choose only one or two that are really top-notch. Naturally, when a device tries to be all things to all people, some things work better than others.

The 1993 Solo 100 head, for instance, is a spot-on emulation of a Hughes & Kettner Tri-Amp if you’re into that heavy Alex Lifeson style tone. The 1987 Brit Gain Silver J is a great replication of the Marshall Silver Jubilee model which uses the same circuitry as the Slash Signature model.

I was tempted to name the Line 6 AMPLIFi 75 as the winner due to its nearly unlimited selection of amp and effect combinations, but as great and feature filled as it is, there is the old adage of trying to do too many things well, and not quite meeting the mark.

There are simply too many weaknesses. The iffy sound quality and points of failure on the interface side are significant concerns, particularly if you are a musician that who often plays live. Perhaps once the technology matures, it might warrant re-examination.

As it stands now, the Peavey Vypyr VIP 1 is the winner in terms of the wide variety of features and functionality. Its drawbacks, which are few, can be easily overcome.

I hope you enjoyed this article and will consider the results when anand if you are in the market for a modeling amp.