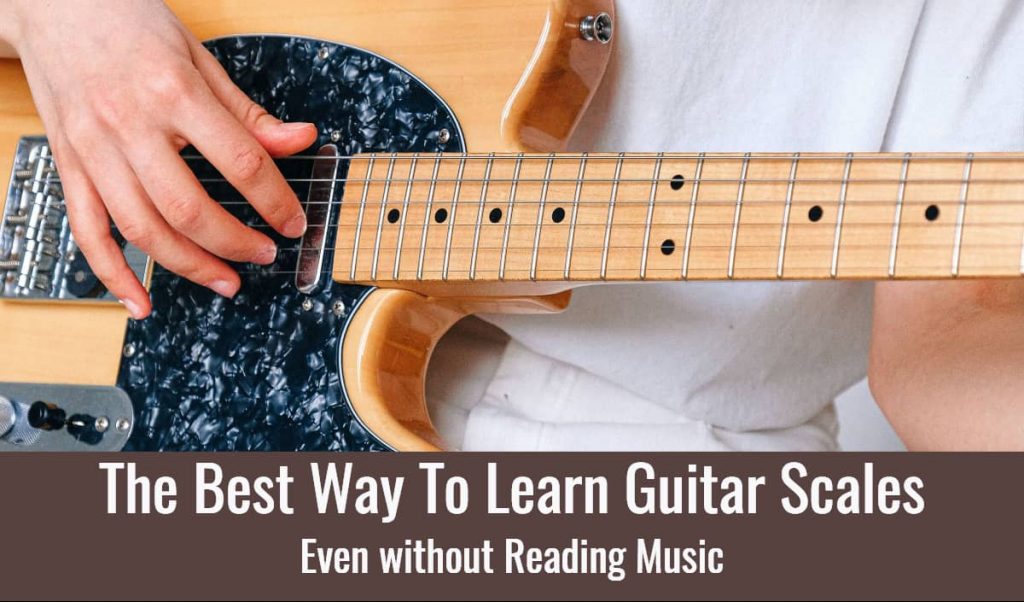 Too many players think learning scales on the guitar is too difficult a task to master. They think you need to be a natural-born Beethoven to play and understand scales and sometimes psych themselves out before they’ve even tried and just keep playing the same old stuff over and over.

I have taught guitar professionally for 5 recent years and am here to show you that the best way to learn guitar scales is the easy way. If you can still sing the ‘Alphabet Song’ you learned as a kid, you can learn all the scales you want without even reading music! Nothing makes me happier as a teacher than to see a student learn things that were once thought impossible.

It’s also important to me to teach you how to see the big picture of music. You’ll learn faster if you concentrate on the big stuff and worry about the details later. Ready to learn? Let’s go!

You’ll only need a few things to begin learning your guitar scales. They are:

Now, for the steps in the process.

Ready for the information that will set you free?

All Scales Are Based On The Alphabet!

I never once had a guitar teacher say that sentence to me. They gave me formulas and other complex ideas but I had to learn this simple truth for myself. Scale notes ascend in alphabetical order from their root/home base note and descend in reverse alphabetical order.

In other words, an ‘A’ of any kind (flat, sharp, or natural) has to be followed by a ‘B’ of some kind. As our musical alphabet only goes from A to G, this makes learning pretty easy. Just remember this Alphabet song if you get stuck.

Step 2: Start With The Easiest Scale!

The best way to learn guitar scales is the easy way, remember? A big part of that is starting out by learning the easiest scale that we guitar types normally play. What’s even cooler is that this scale is also the most common one we usually play and is the raw material for thousands of songs we want to learn.

The Minor Pentatonic comes from what’s called the Natural Minor scale. In the key of A Minor, which is the simplest minor key, it spells ABCDEFGA. Like most of our scales, A Minor contains eight notes.

What’s so cool about the Minor Pentatonic is that it doesn’t even use them all. The ‘pent’ prefix tells us that a pentatonic scale contains only five notes in it. It uses the first, third, fourth, fifth, and seventh notes of the Natural Minor.

In A Minor, that spells ACDEGA, which is exactly what you’ll get if you place the first note of the diagram above on the fifth fret of your low E string and play across. Take some time to learn the pattern if you don’t yet know it and get it memorized.

Use your pen and paper to write the letter names out for each scale a few times, as the names will become important in the next step. Pick all down strokes if you need to, as this is more about content than technique. Chops will come later.

Once you get the scale pattern under your fingers, it’s time to make sure we remember the notes in the scale and not just treat it like a finger exercise. This is a common mistake guitar students make and I don’t want you to fall into its trap.

The easy way forward is to simply say the name of each note out loud as you play it. Some students actually sing the names and try matching their voices to the pitches, which is a fun exercise but not required.

What is required is saying the names as you play them. Doing this in your head doesn’t count. Be sure you can do it while playing the scale both forward and backward. You will probably find going forward through it easier than going backward but it is crucial you do this in both directions.

Why is this the best way to learn guitar scales? Because this method trains your fingers and your brain all at once. If a new player starts out this way and applies Play and Say to any scale needing to be learned, the learning will happen a whole lot faster and the student will know the scale much better than someone who only played the diagram and never spoke the names out loud.

Once you can do the Play and Say thing pretty well, it’s time to bust out your metronome. We use metronomes to keep us in time and at tempo. Here is an online clicker you can have your way with.

Set your metronome to 60 beats per minute, or BPM. That is a good speed to start using. It’s one beat per second. The object of the game is to play and say each note right along with each click of your metronome.

This is the toughest part of the learning process but is also the most important. Nothing we know matters if we can’t do it in time. Stay with it at this tempo until you can do it without thinking about it and stay in time. Once you become automatic, you can increase the speed. Right now, we just want to be steady and smooth.

What To Go Next?

As you get better, there are many Minor Pentatonic lessons on YouTube and other places to go even deeper into this scale. Here is a fun one:

Continue learning scales with this approach. Once you have the system down, move on to Major Scales, Major Pentatonic Scales, and Natural Minor Scales, as these are the most commonly used scales in guitar music. These will then become the gateway if you want to go further and study modes, altered, or exotic scales.

I hope you enjoyed this lesson on the best way to learn guitar scales. Remember that my method works for all scales, not just pentatonics. It’s important for an advancing guitarist to know what notes they are playing, not just a bunch of patterns they might not know how to apply. Do it my way and you will be light years ahead of pattern-only players. Creating good guitarists is important to me and I want you to be one of them.

Please let me know what you think of this lesson in the Comments section and also please share it with your guitar-playing friends, too!

1 thought on “The Best Way To Learn Guitar Scales – Even without Reading Music!”