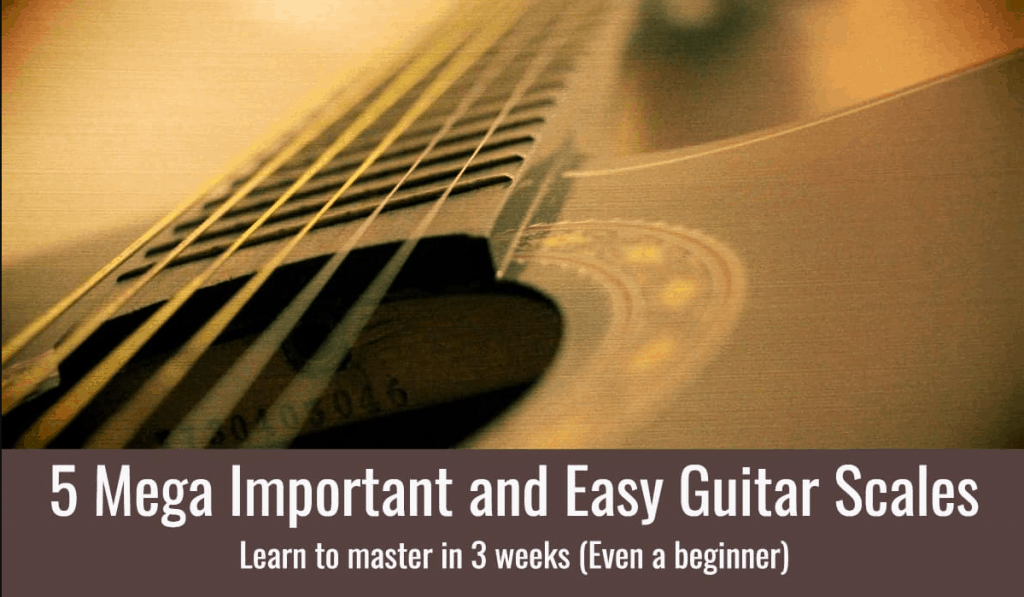 Learning and understanding scales is a huge part of progressing as a guitarist. Even in simple musical settings, the ability to think and play in a key and comprehend what that means is a huge step forward in musical ability.

Scales are a huge topic and it is easy for a new guitarist to get overwhelmed and not know where to begin when it comes to these things.

At first, scales seem random and confusing but they are the key to the door of understanding the things you play and to seeing that our system of music is usually a pretty orderly place and can be understood if approached logically.

The first thing to understand as a student is that you will play these scales long before you mentally understand them. Playing always comes before understanding when learning music because making the sound of a scale or chord is the first step to mastering it.

In this article, we are concerned about teaching you scale names and fingerings. Understanding and insight will follow a bit of consistent practicing.

The scales we will discuss today are:

These five scales, once learned in all keys, will give any guitarist the knowledge and foundation to become as good a player as they choose to be.

The Major Scale is the most basic scale in our system of music and literally gives birth to all the other scales we use. It is the classic Do Ra Mi Fa Sol La Ti Do we learn to sing as children. It is also called the Ionian Mode when discussing the Church Modes.

It consists of eight notes and, overall, generates a bright and cheerful sound or quality.

The first things we need to do is learn the 5 basic guitar fingerings of the Major Scale. This will let you play in one key all over the neck.

These diagrams show the key of G Major. If you put the white-dot notes on Gs, you will play G A B C D E F# G. G Major is a common guitar key and is a good place to begin learning the patterns.

Remember that these patterns are moveable and can be used to play in all 12 Major keys. The first step towards that is getting these patterns completely memorized, so get to work!

In terms of use, we tend to use Major scales to play melodies and solos over Major key chord progressions like G-C-Am-D or G-D-C-G.

The old church song ‘Amazing Grace’ features a melody made entirely from the Major scale and is usually done in G Major. Here is an easy TAB for it. Practice it until you can sing the melody as well as play it.

Here is the video of this song:

Major Pentatonic is nothing more than a stripped-down version of the full Major Scale. It has only 5 notes: the first, second, third, fifth, and sixth notes of the Major scale and is used in music ranging from country to Asian.

In G Major, it spells G A B D E G. Most of us use it in an overlapping way with the normal Major Scale and Pentatonic patterns comprise the most basic elements of guitar soloing.

Here are the patterns:

Start playing and memorizing both sets of scales to get them in your ears and under your fingers. Don’t give up, no matter how long it takes. You’ll thanks me later for a little tough love now

Minor Scales are the next important scale to learn on guitar. Major and Minor are the two basic sounds or flavors that most of us play. Consider them to be of the same importance as chocolate and vanilla at your local ice cream shop. The Natural Minor Scale is what we’ll discuss today.

Remember how I said before that the Major Scale gives birth to all other scales?

Here is your first look at that idea in action. The Natural Minor is built on the sixth note of the Major scale and goes through the same group of notes to its octave or same letter name. In discussions of the Church Modes, it is called the Aeolian Mode.

Here’s how it works. G Major is spelled:

Count up the scale and notice that the sixth note is an E. This is where we begin our E Minor Scale. It is spelled:

It’s the same notes in a different order. This makes E Minor what’s called the Relative Minor key and scale to G Major.‘

Relative’ means they share the same group of notes. Minor scales have a sad and somber sound to them, kind of the opposite of their Major relatives. Here are the fingerings that will get your Minor in motion. They are in the popular CAGED system order and, again, put the white dot notes on Es to get E Minor.

Learn and memorize, tough love, and all that!

Below is a cover (with tab) for the surf guitar instrumental classic ‘Pipeline,’ which is one of the most famous guitar songs in E Minor. It was written and recorded by teenage players, so it’s dead easy.

Just try the melody to get that E Minor sound in your ear!

Minor Pentatonic is, once again, a stripped-down 5-note version of the full E Minor Scale. It is the first, third, fourth, fifth, and seventh notes of E natural Minor and spells E G A B D E.

In many ways, this is the most important scale for guitar students to first learn and master, whether they understand it or not, because it is the primary scale used in rock and blues guitar styles.

Here is a fun video lesson on some on how to play some licks in different Minor Pentatonic patterns.

This is another video clip about using Pentatonics in different keys and chord progressions:

What we normally call the Blues Scale is a six-note scale that is very closely related to the Pentatonic Scales. It has both Major and Minor variants but the Minor Blues Scale is the most important and elemental for guitar students.

It is used in an overlapping way with the Minor Pentatonic so often that it makes good sense to learn them both together, as they only differ by a single note. In e Minor, the Blues Scale spells:

What makes the Minor Blues Scale special is that it adds a note between the fourth and fifth notes from the Minor scale. This note is called the Flat Five or Blue Note.

It adds a bit more grit and dissonance to the Pentatonic sound and you will really start to hear sketches of some famous riffs as you learn these patterns, especially Pattern One shown below.You know what to do by now. Learn, memorize, become one with the patterns. Again, don’t give up until you have them.

This will take a while, so get a comfy chair and settle in. After a while, however, you will be a soloing superstar!

Here is a video on playing and using the Blues Scale:

The Aerosmith song ‘Walk This Way’ is one of the all-time classic E Blues Scale riffs. Here is a quick video lesson on how to play it!

Use the Blues Scale at first over a simple 12-bar blues. Just start playing it over the chord changes and trust your ear. Here is a simple blues progression in A:

Record or loop this to practice over, if you can. Even better, have a friend play it for you and get a jam session going.

We hope you enjoyed this quick look at the most important and easy guitar scales for beginners.Remember, this is a lot of info, especially when learned in all keys, so be patient with yourself but also be determined and consistent and you will master everything shown here.

These scales are vital for new players to learn because they make up, in one way or another, much of the popular guitar music we all like to play. Let us know what you think in the Comments section and please share this article freely if you liked it.