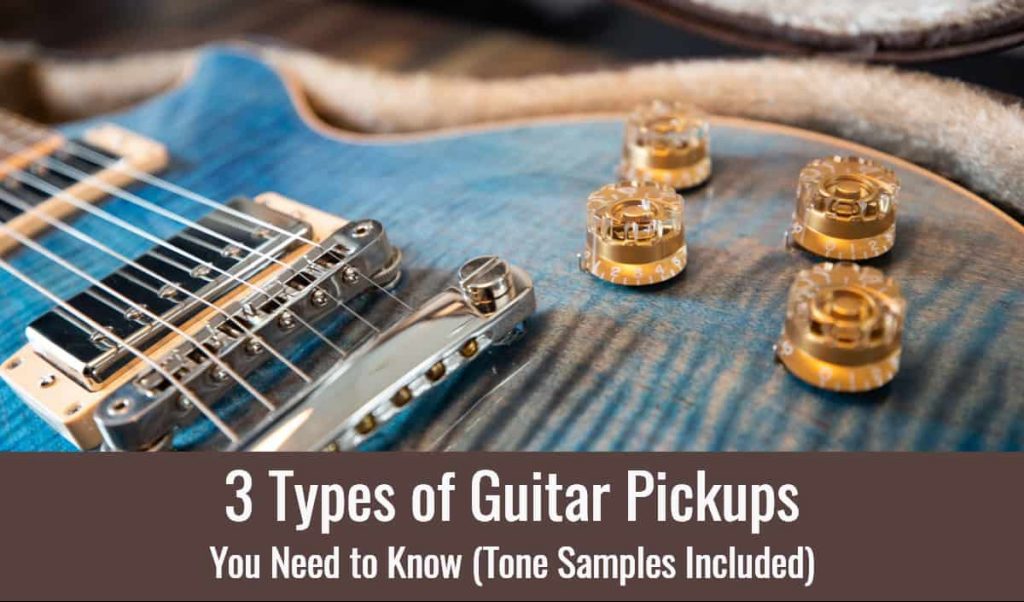 Since the commercial introduction of the magnetic pickup for the guitar by Adolph Rickenbacker back in 1932, pickups manufacturers have introduced a dizzying array of types of guitar pickups, each specifically designed to fit the needs and desires of artists across all genres of music.

Those first pickups, which were really nothing more than a crude horseshoe magnet wrapped with wire, really don’t differ too much in principle from the pickups of today – with one notable exception which we’ll look at later.

It’s important to know about how pickups differ from one another because different styles of music tend to sound better when played through different pickups.

While there are no hard and fast rules about what styles of music can be played on a specific type of pickup, there is no question that a country song, generally speaking, is better suited to the twang of a single-coil pickup such as that found on a Fender Telecaster, than it is to the warmer and fatter sound of a Gibson style humbucker.

There are two primary types of electromagnetic pickups, the single-coil pickup and the dual-coil pickup, also known as the humbucker. We’ll examine each one of these types in detail and finish up with a description of a non-electromagnetic pickup called the piezo pickup. For more in-depth technical knowledge, you should see this post about how do pickups work.

The single-coil pickup is the simplest type of electromagnetic pickup. It is most commonly associated with the Fender Telecaster and Stratocaster guitars.

It consists of a single bobbin, containing a single bar magnet or a series of magnetized pole pieces (as shown above). The magnets are usually either aluminum/nickel/cobalt alloy – known as Alnico – or ceramic, with the ceramic magnets generally offering higher output.

The greater the number of turns, the higher the impedance, that is the electrical resistance, and the “warmer” the resulting tone. Single-coil pickups are generally “brighter” than humbuckers, as a result of more frequency response at the treble, or high-end, of the spectrum. This makes them popular with country style players that look for a twangier sound.

Great examples of the “classic” single-coil sound can be heard in My Best Friend’s Girl by The Cars and the Roxanne by British rockers The Police.

The disadvantage of single-coil pickups is that they are susceptible to a type of electromagnetic interference referred to as hum. This interference induces a low-pitched signal which is usually not severe enough to cause significant distortion in the signal, but is prominent enough to be picked up by the ear if you know what to listen for.

There are three general styles of single-coil pickups, the Stratocaster style – outfitted with either individual pole pieces or a single “blade” type pole piece; the “lipstick” style – so named because the pickup cover resembles a lipstick tube, found on Danelectro guitars; and the aforementioned P-90s.

The advantage of this technique is that the hum generated in the individual coils, as referred to above in relation to single-coil pickups, is eliminated since the two frequencies oscillate in opposition to each other, effectively cancelling them out. This effect is known as humbucking.

Because there is more total wire involved, the windings on each coil can be significantly fewer than single coil, usually between 5,000 and 5,100 per coil. This results in a lower impedance level per coil, and because some of the higher frequencies cancel each other out, the tone is “warmer” and “fatter”.

Like single-coil pickups, there are multiple styles of humbucking pickups.

One style is known as the Filtertron, popularized by the Gretsch guitar company in its hollow body guitars. The Filtertron is unique in that the magnet is considerably larger than with other humbuckers and the coils are narrower and closer together. The bobbins are also taller than those on most other humbuckers.It is a combination of these factors that give the Filtertron a brighter sound, similar to a single-coil, but without the accompanying hum.

Another style of humbucking pickup is the active pickup. The active pickup boosts the weak electrical signal at the guitar itself by adding circuitry and a 9-volt battery within the control cavity of the guitar. This allows a wider variety of tonal options.

Whereas with a traditional passive pickup, tone can only be affected by “rolling off” treble frequencies by means of a capacitor attached to the tone control knob, the active electronics allow the player to actually boost the high frequencies. This is especially useful for jazz and heavier rock styles of music.

The final type of humbucking style pickup is the Stratocaster style humbucker. These go by many different trade names based on the manufacturer, but many guitarists know them as “Hot Rails” These are basically humbucker pickups squeezed into a smaller package to give players of guitars equipped with single-coil pickups the advantages of a humbucking pickup without having to modify their instruments.

In most cases, the coils are narrower and squeezed tightly together to achieve the necessary profile, but attempts have also been made by some manufacturers to stack flatter bobbins one on top of the other. In either case, the effect is to replicate the tonal qualities of the humbucker in a Stratocaster sized pickup.

As stated, humbucker pickups are described as having a warmer, fatter sound than single-coils. This is a result of enhanced low frequency response and a generally cleaner tone with less interference, making them a great choice for jazz.

Hard rock and metal guitarists also favor humbuckers for their ability to translate “darker” and “chunkier” tones. Great examples of this can be found on Metallica’s For Whom the Bell Tolls and Pantera’s Cowboys from Hell.

There is an exception of note to the electromagnetic principle of operation, and that is the introduction of the piezo pickup. In this type of pickup, piezoelectric crystals are used in place of magnets to generate a signal.

The advantages of this type of pickup are two-fold.

First of all, since they do not operate on the principle of electromagnetics, they do not require the use of metal strings; therefore, piezo pickups can be used on nylon stringed classical guitars as well as the relatively new solid body electrics such as the Parker Nylon Fly and the Fender Yngwie Malmsteen nylon string Stratocaster.

Secondly, they are not affected by electromagnetic feedback and interference. For this reason, you will often find them on hollow bodied acoustic guitars which tend to suffer more from the problem of feedback. The concept of piezoelectric pickups has been around almost as long as magnetic pickups, but it has only been in the past 40 years or so that successful models have been developed.

Due to the huge range of applications, piezo pickups do not have any specific appearance. They can take on many forms, from the traditional disk form shown in Fig. 8, above that can be attached directly to the body of the guitar, to a slender toothpick like apparatus that is designed to be installed beneath the bridge to ones that are incorporated directly into the bridge itself.

The beauty of piezo crystals is that they are tiny and can be made to fit into whatever form produces the best response for the desired application.

Piezo pickups are most commonly used to amplify the sound of acoustic guitars without introducing the decidedly non-acoustic sound of a traditional magnetic pickup, but they are finding their way into solid body guitars as well in order to give the instrument a more mellow acoustic tone that would otherwise be unachievable.

Many guitarists are experimenting with mixing both magnetic and piezo pickup outputs simultaneously to produce new and innovative sounds.

Examples are hard to pin down, but one standout is the Yngwie Malmsteen track Nacht Musik from his World on Fire album.

Don’t forget to have a look at the demo below:

Tying It All Together

Just looking at all the options seems overwhelming, particularly if you are a guitar player looking for a new instrument.

Single-coils, humbuckers, and now piezos too, how to decide which one to go with?

A good guide is the type of music you are most likely to play. A country or southern rock player is likely going to want to have a brighter sound and would likely be more comfortable with a single-coil equipped guitar like a Fender Stratocaster or Telecaster; whereas, a jazz or heavy metal musician would probably be happier with a humbucker equipped axe like a Gibson Les Paul.

That is not necessarily a hard and fast rule, though. Judas Priest guitarists K.K. Downing and Glenn Tipton have proven that it is, indeed, quite possible to play metal on a Stratocaster. Ultimately it all comes down to what you like most, and what suits you; and don’t forget, pickups can be swapped out.

If you find you like a big, chunky Stratocaster neck but aren’t wild about the jangling pickups, there’s nothing that says they can’t be swapped out for Hot Rails – or even full-sized humbuckers. That requires some modifications to the guitar, but there a plenty of people out there qualified to do that.