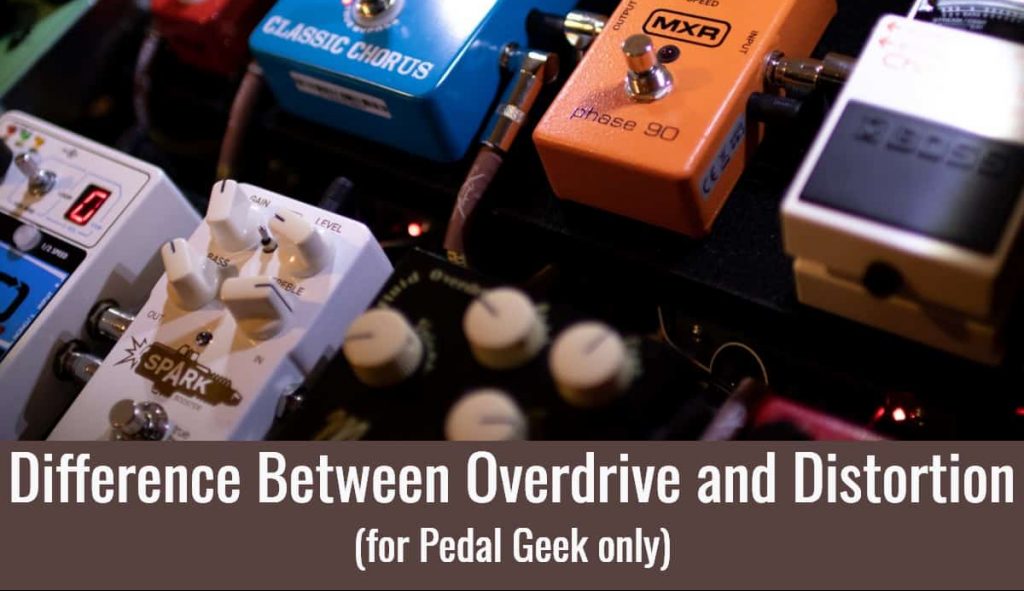 For the uninitiated guitarist, there is a tendency to use the terms “overdrive” and “distortion” synonymously; but it’s vital to know the difference between overdrive and distortion. It’s a natural mistake that many guitarists make, because an amplifier that is overdriven will produce distortion, but they are not the same thing.

Any amplifier can be driven to the point of distortion, however, it is possible to induce distortion through artificial means without overdriving the amplifier.

Why is this so important, you may ask? The answer comes down to defining your sound and doing so in terms that other musicians and sound engineers can understand.

Before we answer this question, a brief explanation of how an amplifier works is necessary.

How Does The Amplifier Work?

The purpose of an amplifier is to take the electrical signal produced by the pickups, and boost – or amplify – that signal to the point where it can be pushed through a speaker to produce sound.

The reality is that transistors, by their nature, very hard to be overdriven in the same way that a tube can be, so the overdrive effect on a solid state amp is usually achieved through some clever circuitry that make it sound as if the amplifier is being overdriven.

If we were to look as an unaltered input guitar signal through an oscilloscope, we would see a wave form that looks something like this:

How The Guitar Signal Is Overdriven?

To overdrive an amp, I increase volume to the saturation level, the resulting output signal would look something like this:

That is known as soft clipping and although the original signal is distorted, the waveform is the same. The resulting sound is usually described as “creamy” or warm without any harshness. This soft clipping can be clearly heard on the opening bars of tracks like Couldn’t Stand the Weather by Stevie Ray Vaughan.

When Does The Distortion Come In?

If a guitar player was to continue to drive an amp over the point of saturation, reach to distortion level, the signal would further change, introducing distortion. This would be called hard clipping and would look like the image below:

As you can see, not only is the signal distorted, but the waveform itself has changed, producing a harder, harsher sound. This is not to say that the resulting tone is undesirable. In fact, a good deal of rock music is built on a distorted sound and it can be much sought after. In the late 1960s, British rockers The Kinks built a career on a highly distorted guitar sound as can be heard on All Night and All of the Day.

I know it’s hard to understand these concepts in some sentences. Here is the diagram that visualizes what happens with the signal in the amp. If you still cannot get the points, do not hesitate to leave your comments below.

Overdrive & Distortion Pedals – What Are They?

In most cases, overdriving or distorting an amplifier is only possible by increasing the volume, but what if you want and overdriven or distorted sound at any volume?

That’s where overdrive and distortion pedals come in. The circuitry in these devices can reproduce a distorted and/or overdriven sound at any volume levels, even at low volumes.

There are a wide variety of manufacturers and models, and naturally each company tries to pack as many features in as possible.

These are some of the popular overdrive pedals:

Or let this ultimate guide helps you to choose the best well-fitted overdrive pedals.

Here are some of the best-selling distortion pedals:

In some cases manufacturers have combined the best of both worlds in combo overdrive/distortion pedals such as these:

Feeling Warm And Fuzzy About Overdrive And Distortion?

I hope this article helped you to better understand the difference between overdrive and distortion, and perhaps more importantly, sets you on the path of discovering how each effect can help you define your sound.

Each one plays an important part in modern music. I like to think of the ways that electronic effects, either naturally induced or shaped by effects pedals, as crayons in a box. You can pick and choose which ones you want to use to color your picture – your music.