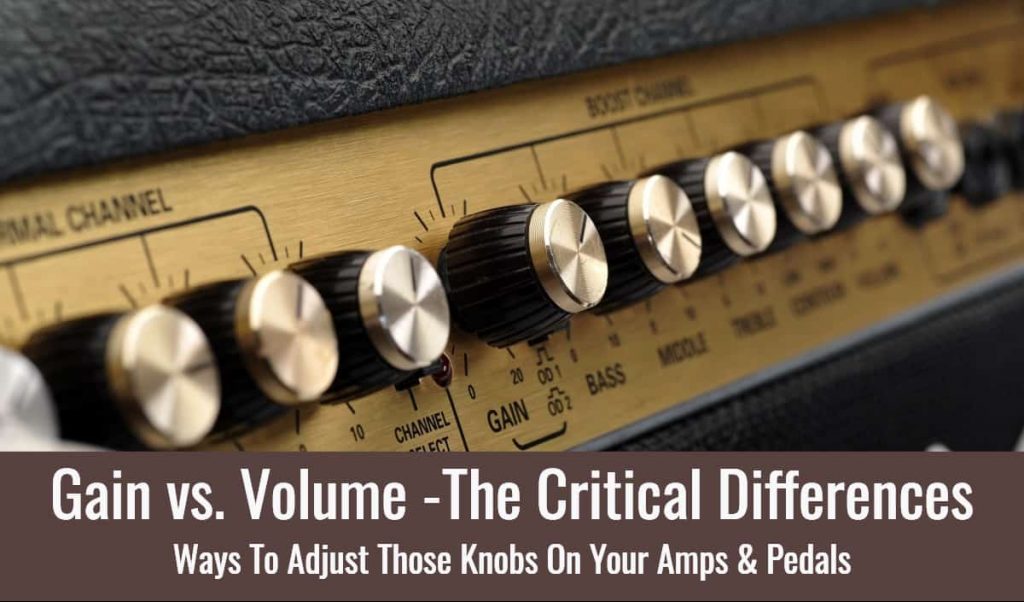 If you are new to guitar, one of the questions you may have struggled with is, what’s the difference between gain and volume, and is it even important?

I know when I first started out with my little Peavey Audition amp in my bedroom, for the longest time I just treated my gain knob as an extra volume control. It seemed to work OK and I was happy with the results – for a while anyway.

But I got to thinking that there must be a reason it’s called gain, not master volume, so I decided to investigate (and back then you couldn’t just Google the answer).

The answer actually opened up a whole new way to fine tune my tone, particularly when I moved up to more sophisticated amps with more complex circuitry.

So, What Is The Difference?

The preamp stage takes the original signal from the guitar and processes it, giving it its tone and timbre, while the power amp stage gives it its output volume and pushes it out to the speaker.

This is an important distinction, because the input volume level determines how much voltage is being sent to the tubes (or transistors in a solid-state amp), and if high enough, produces distortion.

Gain Vs. Volume Knobs On Amplifiers

As described above, with the exception of the simplest and cheapest amps, most amps these days come equipped with a gain control and a volume control.

Depending upon the amp, the gain control can also be labeled as “Drive”. While gain is an electronically accurate description of the function of the control, drive is probably more descriptive.

When you turn the gain control up, it physically “drives” the tubes or transistors harder, eventually reaching the point of saturation and causing distortion.

But what happens when you want to play with distortion but don’t want to play at a volume that causes the neighbors to call the police?

With an independent volume control governing the output volume, you can simply turn the volume down. It won’t affect the distortion level as that’s being controlled by the gain (drive) control.

Buying a new amp? You should follow this definitive guide!

Those Knobs On Effect Pedals

If you own, or have shopped, any guitar effects pedals, you will have noticed that many of them, especially those that have to do with overdrive and/or distortion, have gain or drive controls.

Almost overdrive/distortion pedals have 3 essential knobs: drive – tone – level. How do they affect your output sound?

One of the things I teach my students to do with each piece of their gear is to take the time to sit with each one, turn each control one notch/number at a time and play and listen at each stop.

It takes some time but it’s worth it. Some people can never get a good tone, even with really good gear and some can plug into almost anything and sound great.​

If you do that with each guitar, amp, and pedal you use, you will learn where the sounds you like are found. Also, I teach them to not give up on a piece of gear too quickly. If you stay with anything long enough, you’ll find your sound in it.​

If you have the gain cranked up on the amp and then power on an overdrive/distortion pedal that is also set at a high level, the resultant distortion may be too high and cause breakup in the signal.

It’s important to test the results to determine the optimum settings for both the effects pedal and amp to determine what levels are best for the amount of overdrive and/or distortion that you desire.

This video below demonstrates how an overdrive pedal is used, including the effect that the drive control has on the sound that ultimately comes out of the amp.

Why Is This Imporant To Me?

The simple answer is that it may not be … for right now. The great part of learning the electric guitar is exploring all the new knobs and dials.

How does twisting this knob or flipping that switch affect my tone? There will come point, however, where it is important to you. Knowing what’s what and how to properly operate your instrument is all part of becoming a more proficient musician.

I hope this article was able to answer your questions about the difference between gain and volume and we like to receive comments about how you like our articles and what tips or tricks you might have.

Feel free to leave those in the comments section, and as always, keep rocking!