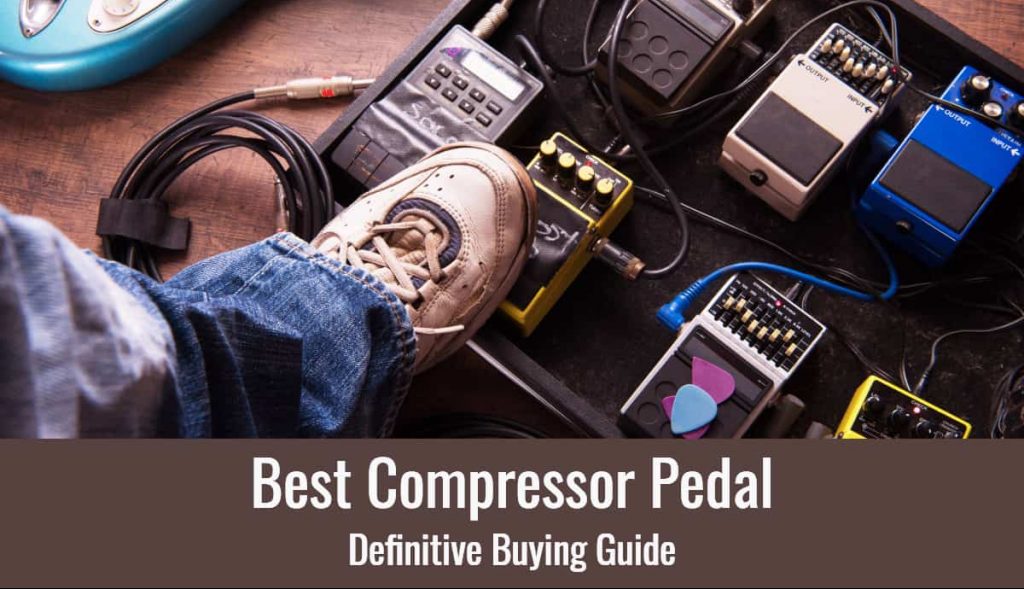 A compressor pedal is one of those effects that everyone knows they need, but they’re kind of at a loss to explain exactly what it does.

As the name implies, a compressor compresses the incoming signal from the guitar so that all notes played will be at nearly the same volume regardless of the strength of the pick attack. This will help to even out tones that sometimes get lost in the mix, and results in a more articulate sound.

This is particularly useful to the metal guitarist whose attack will often varies based on the speed and complexity of the piece being played. In metal, a compressor is most often used to amplify quiet sounds rather than quiet loud sounds.

This clip below provides an excellent demonstration of how a compressor can be used and how it sounds at a variety of different settings – I highly recommend giving it a watch.

1. Why Do I Need A Compressor Pedal?

No matter how accomplished a guitarist you are, the volume of the signal emanating from your guitar is going to vary wildly based on your attack. Sometimes this is desirable, but often times it is not. Performers like Stevie Ray Vaughan and Zakk Wilde who are very aggressive in their style of play are very familiar with this phenomenon.

The problem becomes even more acute with the high-output active pickups favored by metal guitarists. It comes with the territory. That’s why almost all guitarists, regardless of genre, will benefit from the inclusion of a compressor in their signal chain. A compressor will even out those volume swings and make the transition less jarring for the listener.

With decent compressors available in just about every price range, there’s really no excuse not to own one!

2. What To Look For In A Compressor Pedal

There are a number of great compressors on the market, and the price range runs from relatively inexpensive (~$30) to over $200, usually – but not always – based on the number features offered.

At the very least, the compressor you choose should have “attack” and “sustain (release)” controls.

Attack controls the amount of time between a signal being over the threshold and when compression is applied. Under normal circumstances, you’d want to set this knob to make this interval as short as possible, but setting it for a longer lag time allows you to add more expression to your playing by reproducing an aggressive (or light) pick attack before kicking in. This would be ideal for clean leads or genres like blues or jazz, where such expression is necessary to the overall feel of the piece.

Sustain, sometimes referred to as release, is the overall time of the effect. As a note dies off, compression can actually kill the natural sustain of the note; therefore, you want to set a limit to how long the effect lasts. For chunky rhythm parts with a lot of muting, this isn’t particularly important, but when passages require notes to ring for a long time after being struck, it does become an issue.

Read More: What does a Compressor Pedal do? Get Those Actionable Answers

Although a compressor affects both loud and quiet sounds equally, using a compressor that also features a “limiter” can help you have more control over the effect by setting a limit to how loud a signal can go, evening out things even further.

You will also sometimes see compressors labeled as compressor/sustainer. This isn’t really an added feature so much as an emphasis by the manufacturer on the amount of control provided over the amount of sustain the effect allows.

Some compressors also have a blend control. This is a nice feature that allows you to mix your original signal with your compressed signal which tends to fatten things up. Often you will find the perfect level of compression only to realize that some of the body and dynamics of the signal are lost. With a blend control, you can add some of that back into the signal without loss of the compression effect.

3. How To Get The Most Out Of The Pedal?

There is much debate about where the compressor fits best in the signal chain. Some advocate putting at the very beginning right after the tuner and wah because it sends a nice balanced signal to the rest of the effects so that the response is more predictable.

Others insist that it should be placed at the end to boost the overall signal before being sent to the preamp. Unfortunately, any noise or hiss introduced by the other effects will be boosted as well resulting in some unwanted frequencies. This could be remedied by placing a noise gate just before the compressor in the chain, but that would mean adding another effect into the mix and could potentially negatively impact the tone as well.

When dealing with effects loops, it’s always better to keep things simple. In terms of the best settings to use, it will really have a lot to do with what style of music you play.

Let’s check out 4 Pedalboard Orders to learn how to put compressor pedal in your signal chain.

The HyperGravity features a multiband dynamics algorithm that is the same MD3 compression algorithm that can be found in tc electronic’s studio production compressor. As if that wasn’t enough, you can use the free TonePrint app to beam custom-tweaked compression tones directly to the pedal.

With controls for Sustain, Level, Attack and Blend, along with the TC Electronic reputation for high-quality gear, this compressor would already rate high on our list, but add the TonePrint vintage switch for a classic vintage stompbox compression tone and a good effect becomes a great one.

The BOSS CS model compressor has been around in various incarnations since the CS-1 way back in the 1970s and although the circuitry has been updated and improved, the CS-3 is still one of the better known and respected compressors on the market.

Wampler has been around for over a decade now, but is still considered to be a boutique brand. The Ego compressor is highly respected and used by superstars like Brad Paisley and Neal Schon, two guys who really know their gear.

The Ego strives to achieve a natural tube amp type compression without coloring the sound like some other compressors can. It also adds a tone knob to control the brightness or darkness, a feature lacked with most other compressors. Wampler also has produced a product demonstration video:

With less than 10 years in the stomp box business, Xotic Effects is a relative newcomer, but they’ve wasted very little time in proving they belong up there with the big boys.

I broke my own rule here because the Xotic Effects SP doesn’t have an Attack or Sustain knob, just a Volume and Blend. In this case, however, the sound quality is so good that they aren’t necessary. Like many other compressors, it’s based on the legendary Ross compressor of the 70’s.

The blend knob is the real game changer here, so that even though the hi, lo and mid compression give the effect little in the way of fine tuning the attack and sustain, the sensitivity of the blend knob it such that by mixing just enough of the original tone into compressed signal, it will give you exactly what you need.

Keeley advertises this pedal as having the sound quality of expensive rackmount or tube equipment in a stompbox package. It does have a great amount of versatility for a compressor pedal and can be used just as effectively for a bass as it can for a guitar.

In fact, the Clipping control controls input sensitivity and can be used in the studio to run keyboards, drum machines, drum mics, even master recordings and other line-level uses. It works just as well for classic rock as it does for country, blues and jazz. It can even be employed for a good clean metal sound.

The TC Electronic HyperGravity edges out the Keeley 4 Knob. While the overall versatility of the Keeley is nice, it’s unfair to use its other possible applications as a basis for comparison since the decision making criteria for this review is restricted to its use as a compression pedal.

It’s hard to argue that purely as a compressor it’s hard to beat the TonePrint’s ability to edit and transfer custom tones to the pedal. I hope you enjoyed this review and rating and would love to hear your input. Feel free to leave your comments, and always remember to keep rocking!