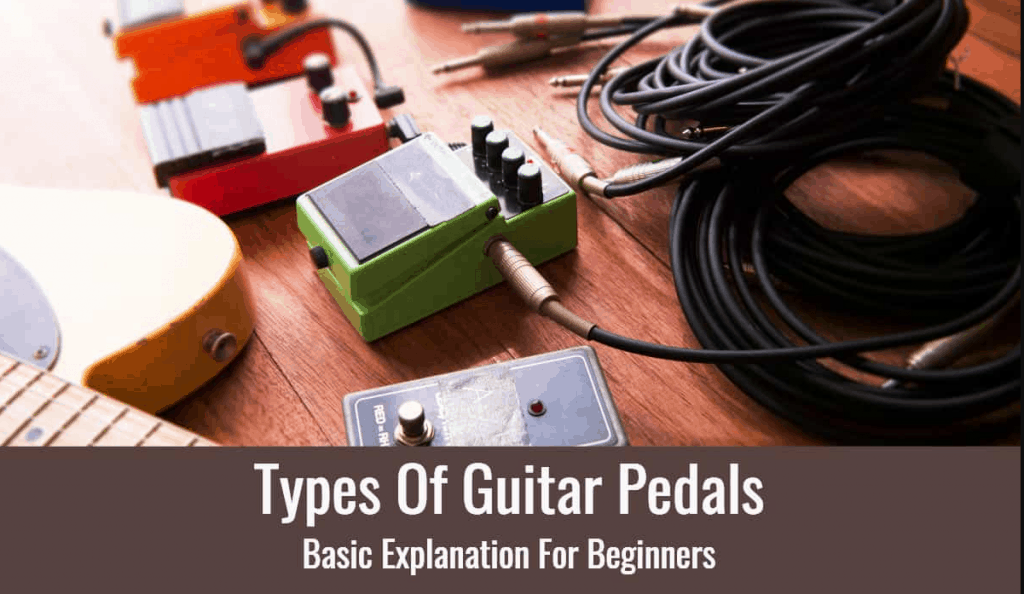 It seems inevitable that whenever a group of “gearhead” guitarists – myself included – get together, the topic of the various types of guitar pedals seems to always come up.

Despite the vast amount of information that’s out there, there still seems to be a good deal or confusion and/or misunderstanding about the purpose and function of some of those pedals.

We all know what a tuner is, and most of us certainly know what a wah-wah pedal sounds like, but what about compressors or flangers or choruses, what do they do?

Well, you’ve come to the right place. As a guitar player with about 11 years of experience, I have dedicated a lot of time to understanding and writing about guitar effects pedals.

With literally thousands of brands and types of pedals in existence, including some home brew jobs by the more electronically inclined among us, coming up with an exhaustive list would be impossible; however, this article will describe the most common types of pedals you will come across, and link to clips where you can actually hear what the sound like in action.

I’ve also placed a red star beside those that I consider more or less essential, particularly for the heavy guitarist.

Obviously, there is no need to run out and purchase all of them at one time, but you should keep this list in mind as you continue to build your rig.

OK, so this one is obvious, but definitely something to keep on your pedal board at all times. Sure, most of us have a tuner that we keep lying around at home on a table somewhere, or conveniently clipped to your headstock, but there really isn’t any excuse not to have one on your pedalboard, particularly if you play live.

The audience surely doesn’t want to wait around for you to go backstage and tune your guitar. You can pick up a nice Boss Chromatic Tuner Pedal or TC Electronics Tuner on Amazon.com.

Nearly all of them will have a single button, which allows you to switch the tuner on (which closes the signal path and silences the instrument) or put it in bypass mode, which reopens the signal path.

Variously referred to as simply a wah-wah pedal or a Cry Baby – even though that is a specific brand name – a wah-wah pedal is a frequency-shifting device that can change the frequency of a specific note or group of notes by lifting or pressing down on the pedal with the flat of your foot just like the accelerator of a car.

Pressing down makes the frequency rise and lifting your foot lowers the frequency as demonstrated here. It acquired the name wah-wah as it was said to be similar to a human voice saying “wah-wah”.

This clip clearly shows how the pedal can be used in a live performance. Some metal musicians also make extensive use of the wah pedal as John Petrucci demonstrates here.

If we’re being picky, overdrive and distortion a technically two separate, though interrelated, concepts. For the purposes of effects pedals though, most manufacturers tend to lump the two together. You will sometimes find pedals specifically labeled one or the other (or something totally weird like Tube Screamer or MojoMojo), but the distinctions tend to disappear at higher drive levels.

Overdrive/distortion is a key element in hard rock and heavy metal so this should be one of the first pedals any aspiring rock guitarist should consider buying.

Plan to buy a new overdrive pedal? This detailed guide is helpful!

A good example of that fuzzy kind of distortion in a modern metal song would be Godsmack’s I Stand Alone.

In the case of most compressors, however, they also function as limiters because a limiter is a type of compression with a higher compression ratio and faster attack. This basically means a quicker reaction time and more compressed sound. Compressors like this MXR or the old reliable Fender compressor are solid choices.

Compression takes a guitar’s signal and makes the loud sounds softer and the soft sounds louder by compressing the signal (hence the name). This results in a more even and less jarring response.

An excellent discussion and demonstration of how a compressor works and how it sounds can be found here. Compressors are especially important in heavy rock and metal settings because there are often rapid changes in volume even within a single verse. Such changes can sound unpleasant to the listener if they are not somehow evened out.

Almost all metal bands use some forms of compression, but perhaps Megadeth is the most well known for making heavy use of compression as this version of Symphony of Destruction shows. Notice how both the high and low frequency response has been clipped to produce a remarkably even response.

One of the cooler effects, in my opinion, would have to the flanger, so named because in the early days, before electronic effects processing, this effect was created in the studio by recording engineers pressing their fingers lightly against the flange of the recording tape reel to slow it down slightly. This led to the same kind of “whooshing” sound you get from the flangers of today.

Flangers like this Vortex flanger, or this MXR EVH117 are typical of some of some of the better flangers on the market. An excellent in-depth description of how flangers work can be found here. Flangers appear in a number of songs and they are quite distinct and instantly recognizable, perhaps nowhere more so than on Black Label Society’s Crazy Horse.

Outside of a tuner and overdrive pedal, if I’m just starting out, a chorus pedal would be my next purchase. A chorus pedal makes you sound bigger than you are. The way a chorus pedal works is that it takes the original sound from the guitar and doubles it, but slightly out of tune and out of time with the original sound. This difference isn’t really noticeable to the untrained ear, but to the listener, it makes it sound like there are two guitars playing the same tune.

Worth to read: The Definitive Guide to choose your best well-fitted chorus pedal!

This produces a thicker, heavier sound. This is particularly useful when playing in a band with only one guitarist, because sometimes the guitar can end up sounding “thin”, especially when competing against the drums and bass and their mid-range punch.

The Andoer LEF-604 and TC Electronic Corona Chorus are both well reviewed. This video has a good explanation of how a chorus functions.Metallica relies heavily on the chorus effect in a number of their songs, particularly Welcome Home Sanitarium or one of my personal favorites from hard rockers The Cult with the heavily chorused She Sells Sanctuary.

There are two types of delay pedal you will hear talked about, analog delay and digital delay. Both of them accomplish the same thing, but go about it in different ways.

Update: Check this fully-definitive post about Digital vs. Analog Delay

Analog delays actually record the sound on tape and play it back mechanically while digital delays use electronic gimmickry to do it. Though there is considerable argument about which is better, it is purely up to the individual as to which one he or she should choose. Analog delay produces what has been described as a more “organic” sound while digital delay is supposedly more processed, but personally, I don’t favor one over the other.

Delay pedals take the sound you play and play it back a few measures later. It allows the guitarist layered sounds for a cool combination effect. The Boss DD-7 is a digital delay that has been around for a long time and has an excellent reputation while the MXR M169 Carbon Copy is equally well-respected analog pedal. This video contains a full rundown of the features of a delay pedal.

Perhaps no song is more illustrative of the usefulness of a delay effect than the intro of Guns ‘N’ Roses’ Welcome to the Jungle which could not have been played without it.

I hope you found this article informative and enjoyable and can see how each one of these devices can be used in music. Hopefully it will lead you into new areas to explore in your own musical evolution.There are certain pedals that I, at this point, could not see leaving out of my repertoire, particularly those that I pointed out as being essential. I invite you to share this article, and if you have any comments, please be sure to leave them below.